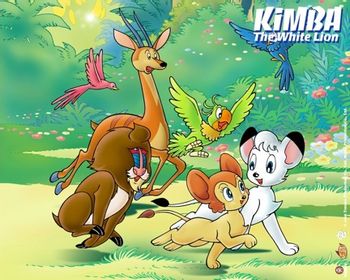 Kimba the White Lion is a 1965 television series based on Osamu Tezuka's manga "Jungle Taitei" (1950-1954), directed by Tezuka himself. The series follows a white lion named Kimba (Leo in the Japanese version) who, due to the death of his father, is forced to become the King of the Jungle. With the help of a cranky old baboon who occasionally attempts to offer advice, a short-tempered parrot, and a dopey antelope, he must attempt to hold peace in the jungle in order to achieve his and his father's ideal of all animals living in harmony without needing to eat each other to survive. His solution to this is to force all the carnivores to become vegetarian... somehow.

In some versions of the story, this really doesn't end well. However, due to the fact that this particular series was a collaboration between Tezuka's Mushi Productions studio and NBC, it remains on the more upbeat side of the scale.

Other anime and remakes of the series include (English name used unless stated):

Of course, if someone in the western world knows of this franchise, it's likely because of its similarities to Disney's The Lion King, leading to Kimba essentially becoming known as "That Japanese thing that The Lion King plagiarized." (In reality, the similarities don't go beyond the surface level, and the story, characters, and overall themes are very different.) note "Simba" is just the Swahili word for "Lion", for the record.

As an additional note, the original series was the first Japanese animated television series produced in color.

Tropes used by the series based on the manga: