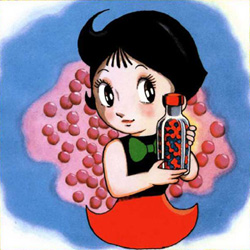 Marvelous Melmo is an early Magical Girl Manga and Anime created by Osamu Tezuka about a nine-year-old girl named Melmo, who must raise her two younger brothers after their mother Hiromi is killed in a car accident. To help with this, her mother briefly returns as a ghost and gives Melmo a bottle of magical candies: the blue candies will make her older, and the red ones will make her younger. The story follows Melmo as she attempts to take care of her brothers and navigate the confusing world of adults, despite still being mentally nine years old.

The manga ran from 1970 to 1972, and the anime, co-produced by Yoshinobu Nishizaki of Space Battleship Yamato fame, lasted 26 episodes in 1971-72 on the Tokyo Broadcasting System (TBS) and produced by then affiliate station Asahi Broadcasting (ABC) in Osaka, Melmo was later aired in Italy in the 80's as well.

Being the first production of the then newly-established Tezuka Productions,note shortly before Mushi Productions went bankrupt and Tezuka Pro inherited their assets it was the first magical girl anime to not be produced by Toei Animation.

The anime was later rerun in 1998 on WOWOW as Marvelous Melmo Renewal which redubbed the show a new voice cast, music, sound effects as well as new theme songs including a cover of the 1971 series' opening. It should be noted that Renewal is the version of the show that's currently in circulation.note Due to the original 1971 audio masters having parts of the audio missing as was revealed in the 1993 laserdisc release.