The Three Faces of Adam 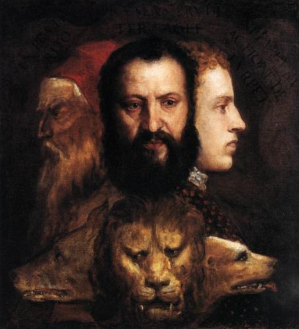 The Three Ages of Man (The Allegory of Prudence

A Spear Counterpart to The Hecate Sisters with influence from The Three Faces of Eve. Basically, a Power Trio for the phases of man's life and the things that drive that man boiled down to their simplest parts, and represented by three often closely related characters.

The three faces are:

Within an all male Beauty, Brains, and Brawn which has gentlemanly, intelligent and strong. All three represent a different kind of manliness: refined, knowledgeable and macho. With men it's generally much easier to spot the contrasts, especially if they're a Power Trio or ¡Three Amigos!.

Very closely related to Noble Male, Roguish Male; here the Hunter is the roguish male and the Lord is the noble male. Alternate names for this bunch abound, such as "soldier, father, and sage."