The Three Faces of Eve 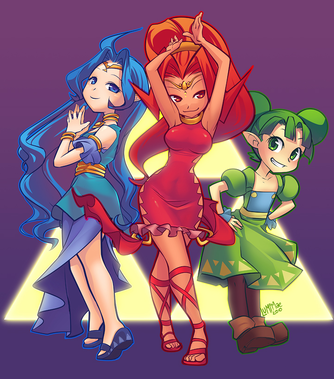 . Used with permission.
A trio of ladies: the steady, wise Wife, the sexual, often lively Seductress, and the innocent Child.
Advertisement:

The Wife is the calmer, more reliable personality, and is someone around whom one could build a home life. This does not necessarily mean she is motherly. The Seductress is passionate, sexually experienced and independent. The "Child" (who does not have to be a literal child) is innocent, perhaps painfully so, sweet and kind.

So in short, a triad of:

All three character types are considered to be very feminine — with Child representing Light Feminine, Seductress representing Dark Feminine and Wife being in the middle. Instead of butch, femme, and neither it's (lady-like) femme, (overtly sexy) femme, and (girly) femme.

Named for the 1957 film The Three Faces of Eve, about a woman with multiple personalities representing each of these types.

We have Shy Rose (The Wife), Hippie Rose (The Seductress), and Superfan Rose (The Child).

We have Shy Rose (The Wife), Hippie Rose (The Seductress), and Superfan Rose (The Child).