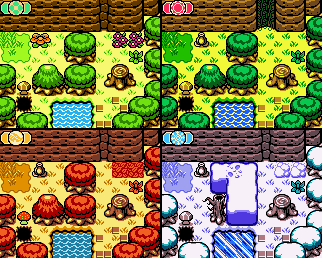 In some video games, mainly platformers, there is a type of level that involves traversing the same terrain, but in different forms - one for each season of the year. For example, one might progress through the "spring" version of the level, then the "summer," "fall" and "winter." This often involves going through a door to travel from one season to the next. Such levels often use the seasonal varieties to create slight changes in each version of the world - for example, an impassible lake in summer might be frozen in winter.
Advertisement:

This is most likely to be a forest/woods-themed level, because it's much easier and visually dramatic to show the differences between, say, spring, summer, fall and winter when the leaves (or lack of) on the trees are different for at least three of the seasons. Compare that to, for example, tropical or desert regions, which are unlikely to even have snow in the winter.

See also Seasonal Baggage. Very likely to result in Dual-World Gameplay. Contrast with Forest of Perpetual Autumn, which is when one particular area is in autumn while the rest of the game world is not.

Click Clock Wood is The Lost Woods, but it is the same level four times over the course of one year, with the duo visiting all four seasons.

Click Clock Wood is The Lost Woods, but it is the same level four times over the course of one year, with the duo visiting all four seasons.