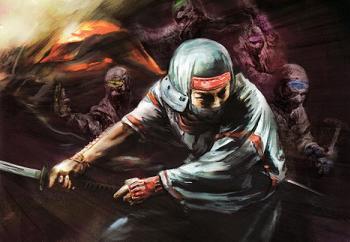 Joe Musashi, the original Shinobi.
He is stronger than steel and moves faster than a whirlwind.
Sometimes he hides in mud. Other times he transforms his shape like an ever-changing cloud.
Although his fighting spirit burns like fire, his mind is as calm as still water.
— "Shadows" (quoted from the Secret Manual of Oboro Ninjutsu), intro to Shinobi III: Return of the Ninja Master
Advertisement:

Shinobi is a series of side-scrolling action games that were released by Sega during the late 1980s and early-to-mid 1990s. The games has the player controlling a ninja (usually Joe Musashi, a nod to ninja actor Sho Kosugi) who battles the forces of evil in each title.

The original Shinobi was originally released in 1987 for the arcades. The player controls a ninja named Joe Musashi, who fights a criminal syndicate known as "Zeed" in order to rescue his kidnapped students. The original game featured a floor jumping system similar to Namco's Rolling Thunder. Musashi is armed with his punches and kicks, as well as an unlimited supply of shurikens (which can be upgraded into a sword and gun), as well as different kinds of ninja arts which could be used to kill all on-screen enemies. Sega also made a Master System rendition which changed the game mechanics by adding more weapons, as well as a health gauge system and the ability to carry multiple ninja arts. There were also licensed versions for the Nintendo Entertainment System and PC Engine.

A single arcade sequel was released in 1989 titled Shadow Dancer, which retained the format of the original arcade game, giving the player a Canine Companion who helps the player fend off enemies. A severely stripped-down version was released for the Sega Master System, while the Sega Genesis got Shadow Dancer: The Secret of Shinobi, which had similar gameplay but with completely redesigned level layouts and different enemies.

Shinobi had further sequels for home consoles, the most prominent being the two Super Shinobi games for the Genesis, which consisted of The Revenge of Shinobi and Shinobi III: Return of the Ninja Master. The Super Shinobi series completely revamps the game mechanics from the arcade games, ditching the one-hit-kill rule from the arcade game, while adding selectable ninja arts and abilities in the process. The series went into a hiatus after the release of Shinobi Legions for the Sega Saturn, which eschews the hand-drawn graphics from previous installments in favor of Mortal Kombat-style digitized graphics.

Sega revived the series in the early 2000s with a new 3D game simply titled Shinobi for the PlayStation 2 in 2002, which had the player controlling a new ninja named Hotsuma, who wields the life-draining blade known as Akujiki (Eater of Evil). Joe Musashi also appeared in the new game as well as a hidden character. It was followed by a pseudo-sequel titled Nightshade in 2003, also for PS2, which featured a female ninja named Hibana. Many of the older titles (namely the three Genesis games and the original arcade game) had been re-released for the Wii Virtual Console.

A new Shinobi game was developed by Griptonite Studios for the 3DS, and released in September 2011.

Sonic & All-Stars Racing: Transformed features Joe Musashi as an unlockable racer as well as a track based around Shinobi called Seasonal Shrines. Hotsuma and Hibana are also present in the sequel to Project X Zone, with the latter notably fighting alongside Strider Hiryu. 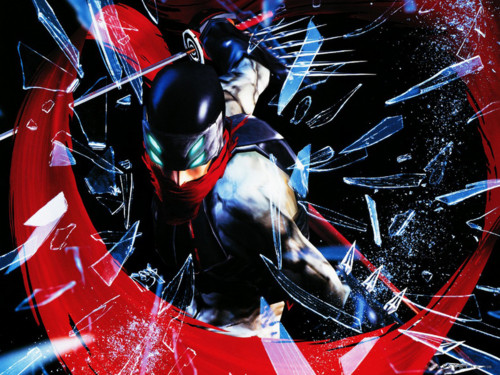 You're not even trying, Hotsuma.

A list of Shinobi games by order of release:

The Shinobi games provide examples of::