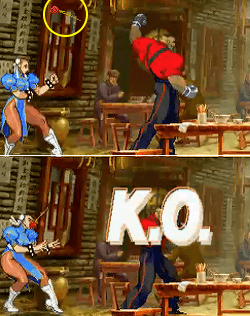 Dudley rose to the occasion of demonstrating this trope.note A little on the nose, don'tcha think? Oh...sorry, Chun Li.
Man: Is there a name for this private little world of yours, huh? What happens there when we don't just run away? You'll kill us... with a soup cup?
Riddick: Tea, actually.
Man: What's that?
Riddick: I'll kill you with my tea cup.
— Riddick, The Chronicles of Riddick (2004)
Advertisement:

Winning feels good, and the more humiliating it is for your foe, the greater the satisfaction. Who cares about good sportsmanship and "being big about it"? You just wanna grind your enemy's head into the earth in the most soul-crushingly cheap way possible for all the grief he's caused you.

Enter Cherry Tapping, the video game equivalent of the Humiliation Conga. Cherry Tapping uses strange and/or weak "weapons", or powers that are lame, weak, and/or stupid looking to defeat powerful, fear-inspiring foes or even other players. It can be a way to show off crushingly superior fighting technique by using a Joke Character in a fighting game; a slow, weak melee weapon in a war game; or shameless abuse of Level Grinding to kill the Final Boss with a feather duster.

Cherry Tapping is sort of the opposite of strategies like Elemental Rock–Paper–Scissors which exploit the enemy's inherent weaknesses for massive damage. Even if it is a One-Hit Kill a la Revive Kills Zombie, Cherry Tapping is purposely using weapons others think of as weak to humiliate, ignoring other items in the arsenal that do damage at a more effective rate. Cherry Tapping is sometimes referred to as Woodpeckering, can (and often will) induce Death of a Thousand Cuts, requires being Willfully Weak. The Fake Special Attack is the Cherry Tapper's signature move.

If humiliation isn't your goal, Cherry Tapping can be used to defeat or subdue an enemy with a lessened risk of killing them. This may be useful if the tapper wishes to capture their enemy, or maybe befriend them afterwards. Or at least, saving rare items that are plain Too Awesome to Use.

Contrast There Is No Kill Like Overkill, which is at the absolute opposite end of the killing spectrum.

A great metafictional display of being Weak, but Skilled.

open/close all folders
4 X
Fighting Games
First-Person Shooter
Action
Role Playing Game
MMORPG
Reckoning-paladin. This ability allowed the paladin to do extra damage after getting critical hit. The gimmick was that it stacked infinitely. Inevitably, there was a paladin crazy enough to get critical hit repeatedly (backstabs were automatic critical hits at the time), and then go solo-kill a world boss. Windfury-shaman. Shamans have the unique ability to put enchantments on their weapons, and Windfury was one of them. Each weapon strike had a chance to knock an opponent back. The thing was, the Windfury effect itself had a chance to cause Windfury. So shamans could put you in an infinite chain of knockbacks. Cyclone-druid. It's a standard crowd control ability, except it can be used as transportation by the caster. At one point druids could use it to get into battlegrounds before they started. Since they also have stealth, this was a pain in the butt. Nowadays more esoteric methods are required to break into places players aren't allowed. Lockpicking-rogue. Not a combat ability, but it's a kind of Cherry Tap because of how it allows this class to exploit the game's economy. There are random loot boxes in the game. Most of the time they have useless stuff in them. Occasionally they have extremely good raiding gear, otherwise unobtainable items, or even legendary items in them. Only rogues, and characters with the jewelcrafting profession, can open them. Everyone else can auction the boxes, but their prices are modest. Spellsteal-mage. It's exactly what it sounds like: you can steal a spell that the enemy has cast on themselves. Some raid bosses have extremely powerful magical defenses. Occasionally Blizzard forgets to make them immune to spell-stealing. This is a chronically recurring problem. Most recently it is famous for causing an exploit in the Black Rook Hold dungeon (in combination with the ability listed below), used by serious Mythic+ dungeon running groups. Enslave Undead-Death Knight. Again, exactly what it sounds like: you can mind-control an undead creature. While this doesn't apply to bosses, it can be used on elites and other mobs found it dungeons. Some of which are ridiculously strong, or automatically cast useful spells on their allies. Or can be exploited by another party member as in the Black Rook Hold dungeon where an undead mage can be enslaved by the party's tank and then have their buff taken off them by the party's mage. Last Stand-paladin. Told you they were going to come up a lot. A talent that allows the paladin to absorb incoming damage, based on the number of enemies they are fighting. Only kind of a Cherry Tap because you can't kill anyone with it, and a protection spec paladin is not likely to kill anyone anyway, but in competitive pve it could be considered a Cherry Tap. The paladin essentially becomes invincible because the effect stacks infinitely: thus allowing them to stand for hours whittling down enemies.
Real-time Strategy
Turn Based Strategy
Other Video Games
Collectible Card Games
Tabletop Games
Pinball