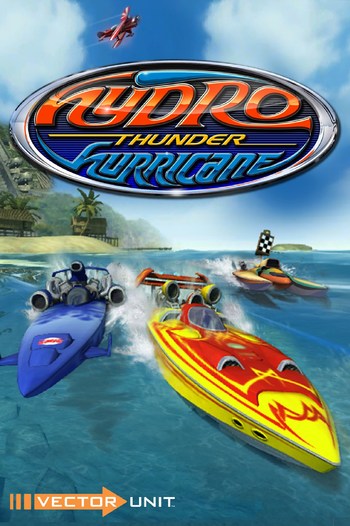 Hydro Thunder Hurricane is a sequel to arcade game Hydro Thunder, developed by a new dev team called Vector Unit, released on Xbox Live Arcade in July 2010. Like its predecessor, HTH features wacky powerboat racing through a variety of locations where boats would otherwise have no business racing. Most of the boats from the first game are back, with updated designs.

In addition to the standard racing game mode from Hydro Thunder, the game also has "Ring Master" events (where the normal Boost powerups are replaced by a series of rings you must drive through, and you get a time penalty for missing rings), "Gauntlet" events (where the course is littered with Exploding Barrels that will blow up your boat, costing you precious seconds respawning and getting back up to speed), as well as "Championship" events (which are multi-race events mixing all three other types). The game also has up to four-player local (split-screen) and 8-player online (via Xbox Live) multiplayer modes, including a team-based even called Rubber Ducky, where each team has to get their designated rubber ducky across the finish line first.

Compare the original Hydro Thunder and its Spiritual Successor, H2Overdrive.