Pinball / The Adventures of Rocky and Bullwinkle and Friends 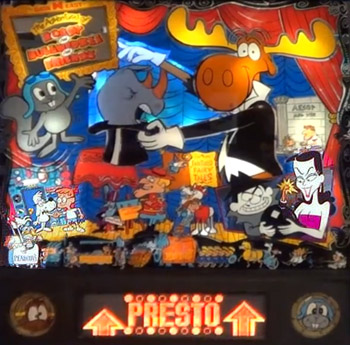 "Watch me pull a rabbit outta my hat!"
Rocky: "And now, here's something we hope you'll really like!"
Advertisement:

The Adventures of Rocky and Bullwinkle and Friends is an arcade pinball game based on the cult cartoon series by Jay Ward. Designed by Tim Seckel with artwork by Kevin O'Connor, it was released by Data East in 1993.

As the title indicates, the title celebrates the animated misadventures of Rocket J. Squirrel, Bullwinkle the moose, the Pottsylvania spies Boris and Natasha, and characters from the show's supporting segments. Help Mr. Peabody and Sherman fire up the WABAC Machine and travel through time, save Nell from the spinning sawblade, defuse the Bomb with the Bomb Extinguisher, and complete the Pie to start Tri-Ball multiball. Hit the Hat targets to enable the Hat Trick, then watch the backglass as Bullwinkle tries to pull a rabbit (and a mystery reward) out of his hat.

Appropriately enough, Rocky and Bullwinkle is a game suitable for all types of players, one that is fun for casuals while offering a fair amount of depth for pros. The colorful art, zany sound package, funny animations, and good variety of shots makes this a nostalgic pleasure for fans of the show.

The Adventures of Rocky and Bullwinkle and Friends demonstrates the following tropes: