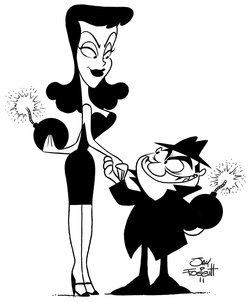 Used with permission.
"His cute little blush. Her bright face. The height difference."
— A comment on this fan-art

of Chiasmata on Tumblr
Advertisement:

Men are usually bigger than women, right? Well, most of the time, but there are cases in which a woman will be taller than her love interest, either because she's unusually tall or because he's unusually short. Sometimes it's both; sometimes the girl is a good deal wider than the guy as well. Generally the first example goes under Statuesque Stunner, while the second goes in Big Beautiful Woman, but either one could also be an Amazonian Beauty.

When this trope happens, the guy might feel self-conscious about dating a woman larger than him, or the girl might feel similarly insecure about dating a man much shorter/smaller than her (and let's not talk about if she wears heels...). But in other cases, the guy will find a woman attractive not despite how tall she is, but partly because of it. Of course, this particular height-contrast lends itself to what the boyfriend might call Marshmallow Heaven.

Naturally, the Opposite Trope of Huge Guy, Tiny Girl and One Head Taller. Often exarcebated if the woman believes in High-Heel Power. Can be related to Ugly Guy, Hot Wife if the man has cartoonish features while the woman is more realistically proportioned, or occasionally with Hot Guy, Ugly Wife if the man looks handsome (or at least normal) while the woman is a mannish or even monstrous hulk. It may overlap with Amazonian Beauty, Statuesque Stunner, Big Beautiful Woman, or Chubby Mama, Skinny Papa. Masculine Girl, Feminine Boy is a Sister Trope, and the two are often found together. Particularly exaggerated versions of this may involve a Giant Woman or an Incredible Shrinking Man.

If you have an entire species with this, you may have a case of Bizarre Sexual Dimorphism.

Alternative Title(s): Go Up On Her, Huge Girl Tiny Guy