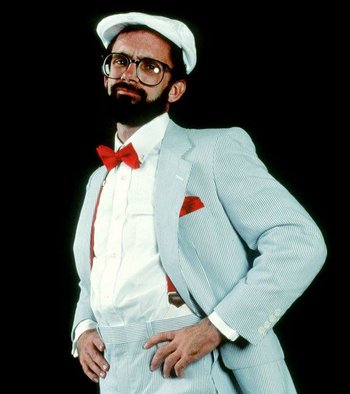 Bruno Lauer (b. 1965) is an American Professional Wrestling manager/referee/official from Memphis, TN best known for his work in WWE as Harvey Wippleman. He debuted in the 1980s working in various Southern promotions as Downtown Bruno. He arrived in WWE in 1991 as Dr. Harvey Wippleman. While he ultimately became the manager of jobbers, he had a few significant moments, namely his feuds with the Undertaker and with announcer Howard Finkel. By late 1995-early 1996, he stopped being an active manager and worked as a referee and behind the scenes as a road agent. He has made the occasional cameo here and there. As for his in-ring achievements, he was the last ever NWA United States Junior Heavyweight Champion

and is the only man to both manage a wrestler (Bertha Faye) to the WWE Women's Title and, later, win it himself.

"Wrestling with the tropes":