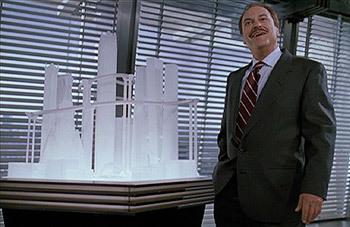 It's made of popsicle sticks and old lava lamps, and held together with pure smugness.
Advertisement:

So a character, often a Corrupt Corporate Executive, has a big construction project planned. The problem is that the odds are this project will not come to fruition, or even if it does, we are just likely to see ground broken on it at the end. So the writers have this character show a model of it so the audience can know what it would look like.

Or perhaps the building is already made, but it's not going to be shown, so the model is just so we can see what it looks like without showing the real one.

Important: If we see the actual building in anything before the last minute of the show, it doesn't count.

A Sub-Trope of Only a Model. Compare Model Planning, which is about making an elaborate model to make some sort of plan of action. See also Picture-Perfect Presentation and Prop.