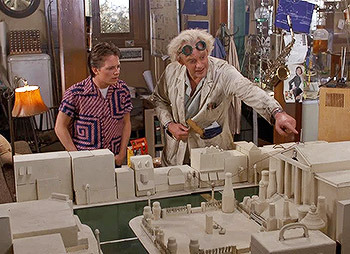 "Let me show you my plan for sending you home. Please excuse the crudity of this model. I didn't have time to build it to scale or paint it."
Young Gray was fiddling about with a couple of Dinky Toys and a model of a street intersection. One of the buildings had a little flag and the whole thing looked terribly like a long-range elimination set-up for telescopic sights and I didn't interrupt except to remind him to lock the door as soon as I'd gone.
— The Sinkiang Executive
Advertisement:

This is the use of models or Props to represent the areas used to make plans, given that such things are easier when people have the context of an area to see what to do.

Of course, the Unspoken Plan Guarantee means the plan rarely works as expected. But it still lets the audience not only know the plan, but also have an idea of what's happening when things go wrong.

A miniature is one of the most common forms of model for this, but CGI models are getting more common. Sometimes the model can even be 1:1 scale, usually if precision in the plan is a must. Holograms are also popular in more futuristic settings.

In Real Life, relief maps were not widely used in the 17th and 18th centuries, so models were common—especially when it came to military engineering, where a model was a must-have if you were building or besieging a fortress.

The Big Board and Planning with Props are Sister Tropes, which often overlap with this.

A Sub-Trope of Only a Model. Compare Exposition Diagram. Compare This Is What the Building Will Look Like, which deals specifically with construction projects and is often (but not always) associated with bad guys.