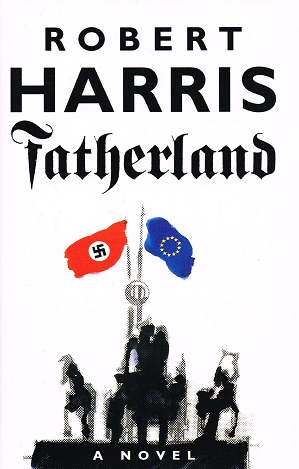 "This was to be the German Millennium, from which even the imagination was to have no means of escape."
— Hugh Trevor-Roper
Advertisement:

Fatherland is a 1992 Alternate History novel written by Robert Harris. It was adapted into a made-for-TV film starring Rutger Hauer and Miranda Richardson in 1994. The story is set in a Nazi-controlled Europe, twenty years after Germany won World War II.

It's 1964 and Adolf Hitler's 75th birthday is approaching. Nazi Germany dominates Europe and is engaged in a Cold War with The United States. President Joseph P. Kennedy has been invited to Berlin, in the hopes of reaching a détente and finally ending the costly war against the American-backed Soviet guerillas.

Meanwhile, a dead body is found and police investigator Xavier March takes on what seems at first to be a routine murder investigation, only to find himself on the trail of an explosive political secret — the long-hushed-up truth about the Final Solution.

The book is one of the more realistic visions of a world in which Nazi Germany has been victorious. Compare a more recent fictional timeline called Thousand-Week Reich, which shares many similar elements.