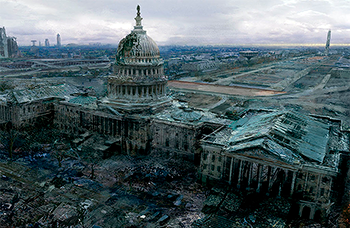 A common way to create a Crapsack World setting is to have the United States fall so much that it becomes much like a third world nation, with a collapsed economy, decaying infrastructure, fallen or incredibly corrupt government, and so on. Perhaps a new Civil War has left the nation battered and weak, only a shell of its former self; or possibly economic collapse due to poor management, lack of an important resource, such as oil, food, or water, or because of the rise of another foreign power has led to a weak US. An invasion by a foreign power has either conquered part of or all of the United States, or weakened it severely; bonus points if it's Russia and/or Mexico on a revanchist drive. Or even a natural disaster of some sort has happened.

In a worst case scenario, it is even possible for the nation to cease to exist as we know it, either being swept into anarchy, broken up into new nation states, or the area as a whole being replaced by a new power. If the term "The Former United States" is said, this most likely happened.

Expect to see major cities from coast to coast become massive slums, with the poor and homeless roaming the streets, sometimes with the tarnished remains of familiar or similar staple American businesses. What remains of the wealthy will be living in fortified enclaves, separated from the common rabble, and the middle class will become all but extinct. Shanty towns become a common sight, and the only form of "reliable" rule is from organized criminal organizations who will jump on the opportunity to take advantage of the desperate situation or large corporations who can now operate above the law thanks to a weakened, corrupt, and/or apathetic government.

What is left of the government (if one even still exists) will be immensely ineffective and corrupt, with greasy politicians trying to hold onto power, or gain power by proposing solutions to regain the nation's once former glory and by claiming that prosperity is right around the corner, or by arrogantly still believing (or trying to fool the populace) that the nation is still strong, despite obvious evidence to the contrary.

The work has a huge potential to become Anvilicious if the creator is trying to preach what will happen if the Real Life United States does or doesn't do X, Y and/or Z, or as a way to create a fictional America led by political strawmen whose political views are opposed to the creator's.

Sub-Trope of Different States of America.

Super-Trope of Rocky Mountain Refuge, where the US is seen reduced to a rump state hidden away somewhere in the mountains.