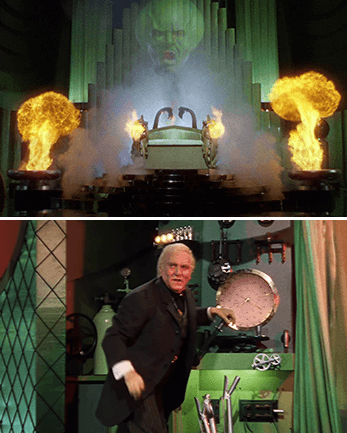 Pay no attention to The Man Behind the Curtain!
So, you live in a world with magic. That's got to be pretty awesome, right? Wait, what?
Advertisement:

Sorry, did you just say that you fake the tricks you do?

Yes, you might be the one guy who doesn't have magic powers in this setting and have to find some way to make up for the disadvantage, you might not have developed your wizarding powers yet but know some killer sleight of hand that will put you up with the best for whatever deceptive reason you choose, or you might be that bastard of a con-man who needs to use stage tricks for part of a certain plan to achieve something that magic just couldn't do. Presenting the trope: there's real magic here, but illusion is being used.

Reasons for this can vary wildly, but usually it's done to either intimidate opponents into backing off or as part of some elaborate scam or con scheme. One particular scene which seems to be the favourite for Fake Wizardry employment is the climactic scene where the heroes scare off the big bad through elaborately-prepared stunts that make it look as if they have some insanely powerful form of magic (which they don't even though it exists).

Other times, a certain feat of über-powerful magic may be some big rumour that it's possible for the most studious or powerful of wizards to achieve. Naturally, some guy is going to either fake this to show off or for the more practical purpose of scaring his enemies/friends either away or into treating him like royalty. That super magic might even be legendary or prophetic, and the wizard fakes having it so that he will become The Chosen One.

If it's not done for benevolent means, expect it to be followed-up by the plot where everyone discovers that the wizard is a fake and the Aesop that they shouldn't fake advanced magic powers... except for those times when you should. (These times being when you're The Hero and... well, you're the hero, or if you're a slightly shady member of the good side who gets away with ends-justifying-means actions.)

If the fake magic manages to not only fool everyone, but actually overpower real magic users, then it's a case of Muggles Do It Better.

Contrast Magicians Are Wizards, where someone with actual magical powers presents them as stage trickery.

Can be related to This Is My Boomstick and Magic from Technology. A subtrope of Sham Supernatural; see also its sister tropes Phony Psychic, God Guise, and "Scooby-Doo" Hoax.

Has nothing to do with a bootleg Wizardry.