This page will contain unmarked spoilers for My Little Pony: Friendship Is Magic. 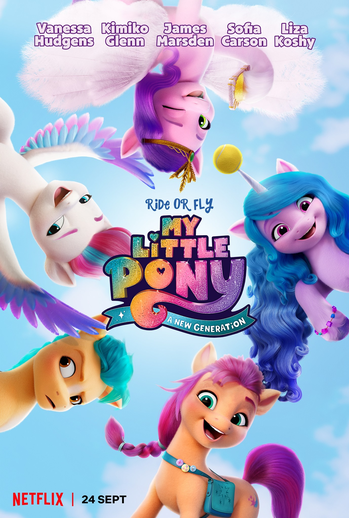 The unimaginable has happened... the magical land of Equestria has lost its magic! Earth ponies, unicorns and pegasi are no longer friends and now live separately once more. But the idealistic earth pony Sunny Starscout (Vanessa Hudgens), inspired by the ancient stories of Twilight Sparkle and her friends, is determined to find a way to bring magic back to their world and reunite ponykind through The Power of Friendship. Teaming up with the open-hearted unicorn Izzy Moonbow (Kimiko Glenn), the pair travel to faraway lands where they are joined by the likes of the charismatic and brave royal pegasi sisters Pipp Petals (Sofia Carson) and Zipp Storm (Liza Koshy), and the ever-responsible fellow earth pony Hitch Trailblazer (James Marsden). Their adventure may be full of challenges and mishaps, but these new best friends each possess their own unique and special gifts that may be just what their world needs to restore harmony and prove that even little ponies can make a difference!

A comic series was announced. Simply titled My Little Pony, It was created by IDW. The comic serves as a sequel to the movie taking place not long after it. The plot involves one of the unity crystals being stolen by a thief with our heroes tracking down the culprit's location to Canterlot. It was released on May 25, 2022.

A video game based on the movie, My Little Pony: A Maretime Bay Adventure, was also released in May 2022.

My Little Pony: A New Generation provides examples of:

Example of:
Roll Out the Red Carpet