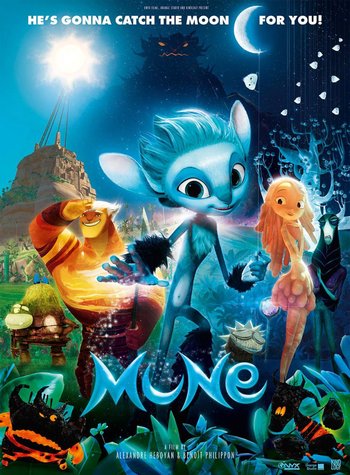 Mune: Guardian of the Moon is a 2014/2015 (its wide release was in the latter year) fantasy CGI family animated film from France, known in its native language as Mune, le gardien de la lune.

Long ago, the world was without light. Then, the legendary hero harpooned the sun out of the sky and brought it to earth, and carved the moon from rock inside the world of dreams. With this, he gave the world day and night. Now, the sun and moon are carried throughout the world on the backs of two massive titans, and they are guided in their journeys by the Guardians of the Sun and Moon. The movie begins with the old Guardians getting ready to retire, and they are holding a ceremony to name their successors. The Guardian of the Sun names his eager but arrogant apprentice, Sohone, as his successor. But although Yule, the Guardian of the Moon, intends to name his apprentice Leeyoon as the guardian, the Creature Purest of Heart, the emissary of the moon's choice, instead picks Mune: a mischievous, awkward boy who is totally unprepared for the job of being Guardian.

On his first night on the job, Mune accidentally breaks the tethers holding onto the moon, and in the chaos that ensues, Necross, Lord of the Underworld, sees the perfect time to strike. He poisons Leeyoon's mind with jealousy and steals the sun from Sohone while Leeyoon distracts him. When the world is plunged into eternal night, Mune decides to set right what he's done wrong and recover the sun from Necross. He reluctantly teams up with Sohone to travel into the underworld. The two are joined in their journey by Glim, a girl made of wax who lives in neither day nor night, and who is a huge history buff — which is good for them, since neither Mune nor Sahone knows much of the lore of their world. Together, they must save the sun and moon before their world erupts into complete chaos.

On November 21, 2016, the movie's North American distribution rights have been acquired by GKIDS and should be seeing an English release in 2017.

Mune: Guardian of the Moon provides examples of: