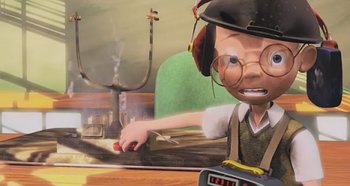 Uh, back to the drawing board.
Advertisement:

In Real Life, a product's design may be rejected because it's not cost-effective to make, because it infringes on someone else's patents, because the expected market for it has diminished, or many other dull-but-practical reasons. In fiction, that's not good enough: for a product to be abandoned, something must go disastrously wrong at a meeting of investors or shareholders, or even at a press conference announcing the product's debut. This always results in the product being cancelled, even if the catastrophe has nothing to do with its quality or lack thereof.

May also apply to demonstrations intended to win a prize or a single sale, rather than to be produced en masse. In the former case, the contestant's entry will be disqualified for a disastrous failure, even if said failure was in no way its creator's fault.

A subtrope of Gone Horribly Wrong. Compare Sabotage to Discredit, where this is deliberately arranged to insure that the product is rejected, Confidence Sabotage, where this is deliberately arranged as a psychological attack on the designer, and Flawed Prototype, where the product simply doesn't work as planned. If a competitor flagrantly stages one of these with an otherwise-safe product to make their own gadget look better in contrast, see Too Incompetent to Operate a Blanket. See also Testing Range Mishap and Education Through Pyrotechnics.

Maybe giving it live ammo for a demo wasn't such a good idea...

Maybe giving it live ammo for a demo wasn't such a good idea...