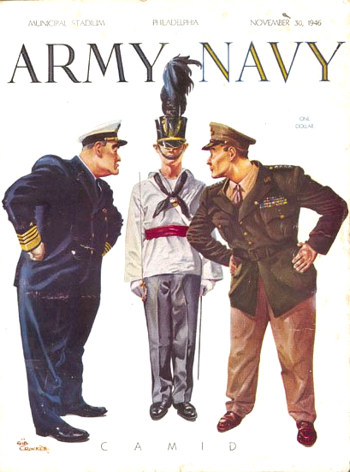 More than just a football game.
"The Soviets are our adversary. Our enemy is the Navy."
— Curtis LeMay, General, US Air Force
Advertisement:

In a perfect world, the various branches of a government (local, regional or central) should be able to cooperate and pull their resources together for the greater good.

The world is not perfect.

One of the reasons for this not happening is usually Interservice Rivalry, where at least two branches of the government don't work well together, sometimes openly opposing and working against each other. Usually if the leaders of said branches know each other, they can't let go of their past feelings and it intensifies the rivalry. Often in military fiction (and in real life as well), some amount of Interservice Rivalry will be encouraged by the higher-ups, to promote a competitive spirit, but sometimes it can get out of hand. Sometimes it is even used by a dark Chessmaster-type leader to maintain control. That way, if the army ever rebels against him, he can always call in the navy to fight for him.

On the other hand, particularly in military-centric works where both services in question are meant to be sympathetic, it's used as a source of humor in the form of personnel of either service making fun of each other, good-naturedly or not.

Cases of Interservice Rivalry can cause Jurisdiction Friction and Divided We Fall. Compare Right Hand Versus Left Hand. See also CIA Evil, FBI Good, in cases where a moral contrast between the two is depicted. There is also Truth in Television to this.