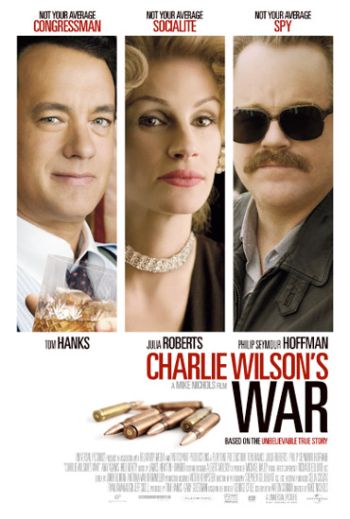 Joanne Herring: Charlie, I want you to defeat the Soviet Union, and end the Cold War.
Charlie Wilson: OK!
Advertisement:

Charlie Wilson's War is a 2007 biographical drama film (adapted from the non-fiction book by George Crile) recounting the true story of U.S. Congressman Charlie Wilson who partnered with CIA operative Gust Avrakotos to launch Operation Cyclone, a program to organize and support the Afghan mujahideen in their resistance to the Soviet occupation of Afghanistan. It was directed by Mike Nichols, written by Aaron Sorkin, and starred Tom Hanks, Julia Roberts, Philip Seymour Hoffman, and Amy Adams.

The plot follows Charlie Wilson, who has a very gregarious social life of women and partying, including having his congressional office staffed with young, attractive women. A friend and romantic interest, Houston socialite Joanne Herring, encourages Charlie to do more to help the Afghans, and persuades Charlie to visit the Pakistani leadership. The Pakistanis complain about the inadequate support of the U.S. to oppose the Soviets, and they insist that Charlie visit a major Pakistan-based Afghan refugee camp. Charlie returns home to lead an effort to substantially increase funding to the mujahideen. The story then follows the rapid evolution of Wilson's suggestions to multi-million dollar funded projects by the United States. Teaming up with gruff but knowledgeable CIA agent Gust, Charlie starts seeing results as the Afghans fight back against the Soviets. But Charlie starts finding out there are unintended consequences happening, and that the secret war effort is slipping down a slope he didn't want...