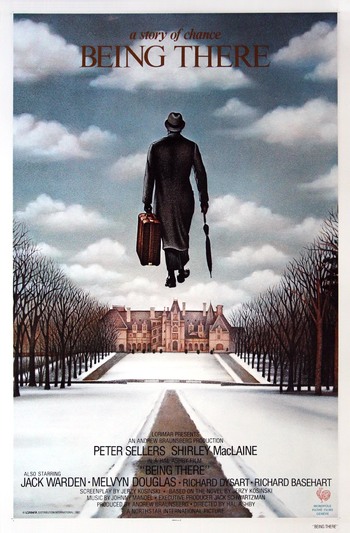 "Life is a state of mind."
Advertisement:

Chance the Gardener (Sellers) is a mentally-challenged middle-aged man who has never set foot outside of the elegant Washington, D.C. townhouse he lives in with his wealthy employer, "the Old Man". Chance has only two pastimes in life: gardening and watching television. Not long after the story begins the Old Man is discovered dead. In the aftermath Chance is told by the lawyers who have shown up to close the house—and who have no record of a gardener being employed there, much less living there—that he must leave. Thus, he packs a suitcase of clothes (all hand-me-downs from the Old Man) and his remote control and heads out into the world.

Soon enough, Chance is accidentally struck by a limousine and his leg is injured. Its passenger, Eve Rand (MacLaine), happens to be the wife of elderly, dying financial titan Ben Rand (Douglas); and, since their mansion is now partially set up as a hospital, she invites Chance to recover there. On the ride over, she mishears his name as "Chauncey Gardiner". Though honest by nature, Chance doesn't realize she's making a mistake, and things snowball from there. Both Eve and Ben take a shine to this ruined businessman (well, that's what they think he is; he has such nice clothes, and is so polite), and the latter introduces him to the President of the United States (Warden). When asked what he thinks of the current economic climate, Chance—confused and grasping at the word "growth"—replies with an intelligent-sounding line about severed roots. Both men are duly impressed, and soon Chauncey Gardiner has become one of the most powerful people in America, if not the world.

Peter Sellers was particularly touched by Kosinski's satire; he heavily identified with Chance's fate to be only what others want/need him to be. He was determined to play the role in a film version, which took about seven years to get off the ground, as his star had fallen far by the early 1970s. Thus, the latter entries he did in The Pink Panther series were largely made to re-establish his bankability and reputation. Between this and director Hal Ashby's own rising star (Sellers was a fan of Harold and Maude and immediately pegged him to direct) by way of films like Shampoo and Coming Home, the film finally arrived in 1979. It is a close adaptation of the book, albeit with some significant expansion and, perhaps most famously, a Twist Ending. It is also Sellers' penultimate film.note His last, The Fiendish Plot of Dr. Fu Manchu, was released posthumously.

To this day, a politician criticized for being all style/sound bites and no substance or even intelligence is likely to be compared to Chance. Compare and contrast Forrest Gump.