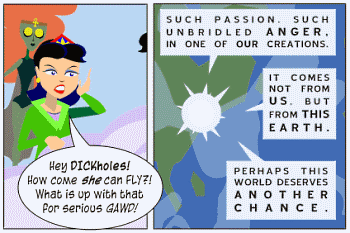 Such bitchy selfishness is wisdom for the ages.
"Beyond its entertainment values, Baywatch has enriched, and in many cases, helped save lives."
— David Hasselhoff, world hero
Advertisement:

Any time something is mistaken for deep, intelligent, or artistic, but it's clearly not. This could be for many reasons. Sometimes it's about differing perspectives on the meaning of what is said/done. Sometimes people lack the full context of what they are mistaking. Sometimes there is no reason other than Rule of Funny.

What happens next can also vary. The mistaken person may never be found out (and he/she may just go with this). Sometimes it causes problems for the mistaken person. Sometimes the mistaken thing is revealed to be what it is almost immediately after being praised (often by a character who is The Ditz, so it's pretending to be Dumbass Has a Point and then subverting it).

A Super-Trope to Seemingly Profound Fool (when The Fool or The Ditz is constantly mistaken for being profound).

Compare Ice-Cream Koan, Comically Missing the Point, Not Actually the Ultimate Question. When the entire work gets this treatment from the audience, it's Everyone Is Jesus in Purgatory.

After accidentally chaining himself to a tree, Harry is mistaken for a heroic protester.

After accidentally chaining himself to a tree, Harry is mistaken for a heroic protester.