Film / Beyond the Darkness 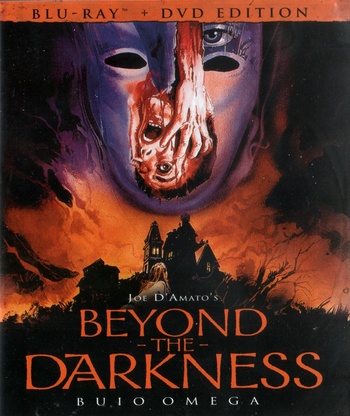 Beyond the Darkness (AKA Buio Omega) is a 1979 Horror film directed by Joe D'Amato. It consists of a very rich taxidermist named Frank who lives with his housekeeper Iris in an opulent villa. Frank loses his fiancee Anna due to which he goes insane, robs her grave and dresses her up in his villa. He also loses it further indulging in serial killing, cannibalism and (implied) necrophilia, all the while helped by his extremely creepy housekeeper, Iris who due to some voodoo killed Anna to get Frank for herself. Ultimately, Anna's twin sister, Elena visits the villa and all hell breaks loose...
Advertisement:

Widely regarded as D'Amato's finest (read "least hack-ish") effort with focus on characters and some genuine suspense apart from some truly disgusting gore and a relentlessly downbeat tone.