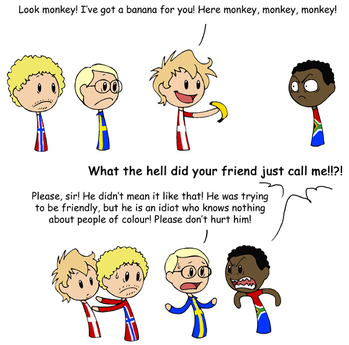 "But you're not like other gypsies. They're... evil!"
— Quasimodo, The Hunchback of Notre Dame
Advertisement:

So you've got a really nice character who comes from a sheltered background. They could be a Sheltered Aristocrat or Spoiled Sweet, or maybe they grew up in a culturally homogeneous community, like a time traveler from a much less global society. They're not used to dealing with people from other ethnic/religious/etc. groups, but that doesn't mean they have a problem with those groups. Far from it! In fact, they probably think other cultures are really exotic and cool and wouldn't it be awesome to have a Token Black Friend? This is part of the problem.

When the Innocent Bigot meets characters who don't share their background, their ignorance will lead them to say and do things that are insensitive or downright offensive without realizing it. "Wow, I thought [members of group X] would be [insert stereotype here], but you sure are different!" Or, "I've never met a [member of indigenous group Y] before! It's really cool how you guys live in harmony with nature and stuff!" Another common variant is the male character who was taught to be chivalrous toward women and is surprised to learn that Action Girls aren't fans of male disposability, and also find it insulting to be told to stay back.

Innocent Bigotry is often portrayed as a relatively sympathetic flaw (which can lead to Unfortunate Implications if it's not ultimately suggested that the character ought to take some responsibility for thinking about whether they're doing something offensive). In fact, in a setting in which most other characters are the hardened and mean-spirited kind of bigot, the Innocent Bigot might even be the hero. If the Innocent Bigot is a minor character, it will be Played for Laughs and used to characterize them as well-meaning but also shallow and self-absorbed. If they're a major character, though, expect them to be called on their prejudice. They will be genuinely shocked and remorseful, and probably thank the person who challenged them for opening their eyes. (Rarely do they instead become defensive and hostile, as often happens in Real Life.)

Noble Bigot is a closely related trope. The difference is that the Noble Bigot has attitudes that are overtly bigoted and probably understands perfectly well that their beliefs would be considered offensive by many people, but is a good person otherwise. The Innocent Bigot holds absolutely no malice toward the people they offend and sincerely has no idea that their ideas about other cultures are ignorant, insensitive, and harmful. It is not quite this simple in Real Life, where the Innocent Bigot and the Noble Bigot can subtly overlap (e.g., a character really wants to be kind to people who are different and tries their best, but harbors feelings of fear or resentment deep down which occasionally manifest themselves as crude commentsnote In Real Life things get even more complex again, in that the institutionalized prejudice of the environment where someone grows up colors their views at a subconscious level, and even if they know at an intellectual level what the right viewpoint is, they may be fighting their own background in-built responses in trying not to react to someone different in an offensive way! This is often the case for people who come from non-diverse communities and suddenly interact with people that they are unfamiliar with or in unfamiliar ways).

Very often Truth in Television, particularly due to differing social values between cultures and even between different points in a nation's history. Innocently Insensitive is the supertrope. The character might grow into a Troubled Sympathetic Bigot, especially if Cerebus Syndrome ensues. Other related tropes include Condescending Compassion, Positive Discrimination, Fair for Its Day, The Ingenue, Mistaken for Racist, Obliviously Evil, Racist Grandma, Values Dissonance, Virginity Makes You Stupid, You Know I'm Black, Right?, You Are a Credit to Your Race, and Not Like Other Girls. For honest error rather than honest ignorance, see Noble Bigot.

When Throk arrives to Dragon's Edge to ask for Ruffnut's hand in marriage he wants to "ask" her by taking her over his shoulder and taking her to his island where she will be his wife whether she wants to or not. This gets a rather humorous reaction from Astrid, who becomes so enraged by his sexist traditions that Hiccup has to keep her from coming at him with an axe.

When Throk arrives to Dragon's Edge to ask for Ruffnut's hand in marriage he wants to "ask" her by taking her over his shoulder and taking her to his island where she will be his wife whether she wants to or not. This gets a rather humorous reaction from Astrid, who becomes so enraged by his sexist traditions that Hiccup has to keep her from coming at him with an axe.