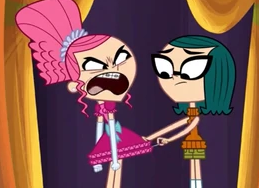 The insufferable Alpha and the ever suffering Beta.
Advertisement:

The Innocent Beta Bitch is a friend of the Alpha Bitch who isn't as mean as the alpha.

They are hinted as being much nicer than they seem, which becomes more apparent whenever they aren't with the alpha. Any meanness they do show is portrayed as them following the alpha's lead and not truly meaning it.

Alternatively, they are portrayed as being much dumber or not being able to think for themselves, so they just follow the Alpha Bitch's lead.

There's a good chance they will break the friendship after too much cruelty from the alpha. Also, expect them to end up being friends with the alpha bitch's enemies.