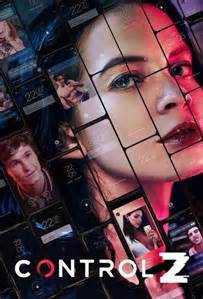 Control Z is a Netflix Original Teen Drama series set in a Mexican high school, National School, whose students get into all sorts of trouble (along with some staff members).
Advertisement:

Season One starts with an outpouring of many people's secrets that a mysterious hacker reveals, creating chaos. Sofia Herrera, one of the students, sets out to track down the culprit so further harm is prevented.

In Season Two, a hidden "avenger" begins attacking the people who had their secrets disclosed (and their loved ones, sometimes) as revenge on them for "wrongs" the person believes that they're guilty of.

Pablo: Look, my mom went through the same as well. She got pregnant when she was young. My grandma wanted her to have an abortion because it would screw her life.
María: Yeah, I know, Pablo. Your mom is your heroine. She was lucky to have you. You haven't even asked what I want.
Pablo: But I know what you need. I promise I'll be the best dad ever.