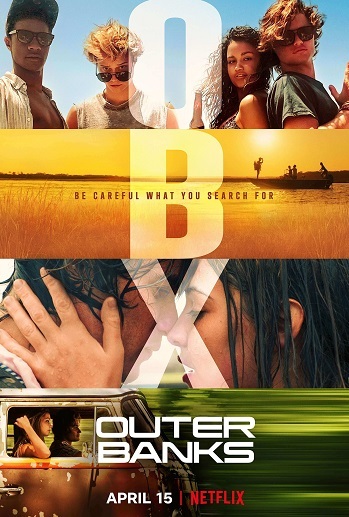 Outer Banks is a 2020 Netflix adventure series created by Josh Pate, Jonas Pate, and Shannon Burke that centers around a group of teens from the Outer Banks of North Carolina who call themselves the Pogues. The Pogues spend their days working, surfing, partying, and getting into scrapes with the Kooks, the upper class that rules the other half of the Outer Banks.
Advertisement:

The main cast of Pogues, John B (Chase Stokes), the leader of the group and avoiding child services after his father went missing 9 months ago, JJ (Rudy Pankow), John B's best friend and regular problem creator, Pope (Jonathan Daviss), the "brains of the operation" and Merit Scholar candidate, and Kiara (Madison Bailey), who is technically a Kook but hangs with Pogues and cares deeply about conservation, uncover a lot more than they bargained for when they decide to loot a boat that sunk during a hurricane. In the process, they end up being tangled with the Camerons, a Kook family that John B works for, consisting of Ward (Charles Esten), his son, Rafe (Drew Starkey), and his daughters, Sarah (Madelyn Cline) and Wheezie (Julia Antonelli).