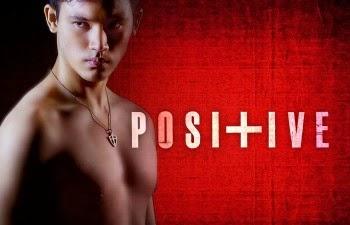 Positive (stylized as POSI+IVE) is a Filipino drama series broadcast by TV 5. It follows the story of Carlo Santillan, a call center agent who, after having previously lived a hedonistic lifestyle, later discovers that he has since developed HIV/AIDS, and attempts to track down who might have infected him.The series, directed by Eric Quizon, is the Philippines' first television program that directly deals with the topic of HIV/AIDS. It premiered on October 17, 2013 and ended on January 9, 2014 as part of TV5's primetime block, where it broadcasts at 9:00 pm. However, unlike regular Philippine dramas, which air episodes daily, episodes of Positive (and For Love or Money, which precedes it) air weekly on Thursdays.
Advertisement:

Positive follows the story of Carlo Santillan (Martin Escudero), who since high school lived a very hedonistic lifestyle. Describing himself as the "life of the party", he freely consumed drugs and alcohol, and had numerous sexual partners since he was fifteen. After entering rehab at the urging of his mother, Esther, Carlo has attempted to set his life straight: he has found work as a call center agent, rising through the ranks until he became operations manager, and has since married his wife, Janis (Helga Krapf), who he met while in high school, and who is three months pregnant with their child.

Despite setting his life straight, Carlo started developing recurrent pneumonia symptoms, and at the urging of his doctor, had his blood screened for possible HIV infection. The tests eventually show that despite appearing healthy, not only is he HIV-positive, but he has developed AIDS. Carlo later attempts to retrace his past in order to determine who was the person that might have possibly infected him with the virus.

. (Warning: You might need a Filipino acquaintance to translate for you. Some parts are in English, though)

This program tested positive for the following tropes: