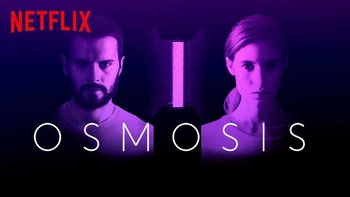 "Can humans survive being in a state of permanent happiness?"
Advertisement:

Osmosis is a French-language sci-fi thriller series released in 2019 on Netflix created by Audrey Fouché.

The series follows a pair of siblings, Paul and Esther Vanhove. In the future, people have turned to services that allow them to have sex and relationships through avatars in virtual realities. Willing to fight against it, the siblings create Osmosis, a nanobot-based implant that will help people to find their true soulmate by dipping into their conscious and subconscious memories and thoughts, as innovative as it is intrusive. The pair quickly gets involved in a deeper and deeper plot as Paul does the impossible to try to make his company take off with him at the helm, inspired by his own success with it meeting his current wife, while Esther seeks for a way to use the implants to heal her mother, who is in a vegetative state, willing to bend the rules and go behind his brother's back for it.