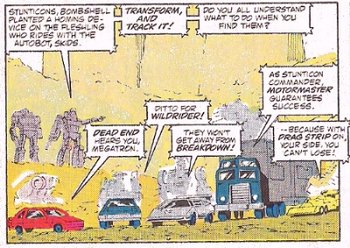 An Introdump is a type of Infodump specific to a large ensemble show, in which hordes of characters are introduced and immediately all referred to by name. They may be new characters, they may be old characters being reintroduced after a break, but they're all standing in a line and they're all perfectly happy to say their own names.

Intro Dump is a cross between Dramatis Personae and Everyone Meets Everyone in the middle of a scene. It's different than Avengers Assemble because everyone is already in one place. Sometimes each character will say their own name during a Training Montage. Other times, the head of their Cast Herd segment will call everyone by name - and always by the order they're already standing in.

In comics, this is sometimes simplified by having a page at the front, outside the actual story, which simply shows a picture of each character along with their name and superpowers. The advantage here is that long-time fans can skip this page entirely, without having to worry that they missed part of the story.

The Trope Namer is TFWiki.

May be called as a sub-process during the bridge of an Expository Theme Tune. If the characters introduced are from a Merchandise-Driven work, then it's a Product-Promotion Parade. Also see Theme Tune Roll Call. This often averts Nominal Importance by giving names to people who happen to be on the same team as the principal characters but afterwards fade back into the ensemble and receive no further characterization.

The 15 contestants, their occupation, their hometown, a mention of the returning contestant, and the series leaderboard. Need anymore?

The 15 contestants, their occupation, their hometown, a mention of the returning contestant, and the series leaderboard. Need anymore?