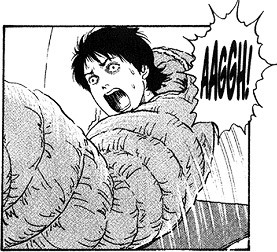 My sleeping bag is trying to eat me!
"Any person awaking from a nightmare, must always sit bolt upright in bed and scream."
— "Hollywood Rule Book"

Whenever a character awakes from a nightmare in fiction, he will fling themselves to a leaning or sitting position, panting and looking around frantically, and maybe even screaming, despite this being rather implausible in Real Life.

Think carefully: how many times do you remember waking up from a nightmare by flinging your torso upwards? Probably never, right? Most people might pant, look confused, and take a few seconds to check their surroundings and get reoriented. But actually flinging themselves upright is laughable. The most you'll likely get is a gasp and a full-body twitch, or some odd moaning coupled with sleep paralysis, although children may wake up screaming. However, because these actions are small and don't come across very easily on camera, works of visual mediums employ this trope.

This does happen occasionally in the real world, but usually it's because someone is startled by an outside sensation (like a loud noise), not a nightmare. Most of the time, certain chemicals secreted while falling asleep prevent the sleeper from acting out their dreams, a condition known as "sleep paralysis", which stops us from hurting ourselves in our sleep. This extends to shortly before falling asleep or just after waking up. The rare times it does happen in real life involve a neurological disorder where the person is woken up from the dream by a sensation, not the other way around. Such sufferers often describe the feeling as being "pushed" upright. Nevertheless, the Catapult Nightmare happens every single time in fiction. If it's a Dream Within a Dream, expect two. Possibly more.

A night terror can have this effect, but it doesn't involve waking up and doesn't involve a dream—just full-on activation of the fight-or-flight system in the middle of the deepest stages of sleep. People who have them usually don't remember it in the morning.

Lightning dreams of losing the tiebreaker race to Frank who invades his dream and wakes up screaming "No!".

Lightning dreams of losing the tiebreaker race to Frank who invades his dream and wakes up screaming "No!".