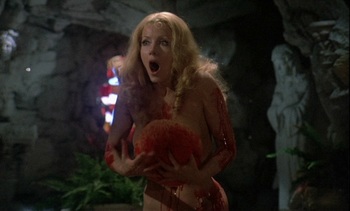 That's one hell of a sponge bath.
Countess Dracula is a 1971 Hammer Horror film. It is a fictionalised account of the legend surrounding Elizabeth Báthory - who was convicted for the imprisonment and murder of hundreds of young women. History remembers her as 'The Blood Countess' and she's thought to have inspired part of the Dracula story.
Advertisement:

In medieval Europe, the middle aged Countess Elisabeth (Ingrid Pitt) has just buried her husband and, in a fit of rage one day, strikes one of her ladies-in-waiting and draws blood. She notices that when she wipes the blood off, her skin looks younger. She then bathes in the girl's blood and is transformed into a youthful woman. She passes herself off as her own daughter Ilona returning from years abroad and begins a romance with Lt Toth (Sandor Elès), much to the jealousy of her former lover Captain Dobi (Nigel Green). Unfortunately for Elisabeth, the effects of the blood are only temporary and she must kill again if she is to regain her youth.