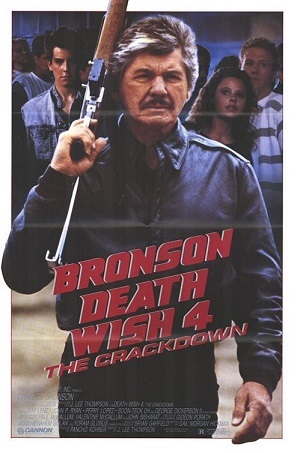 Death Wish 4: The Crackdown (1987) is the fourth movie in the Death Wish series starring Charles Bronson.

Kersey returns to Los Angeles. The vigilante is unleashed again after the daughter of Paul Kersey's current girlfriend dies of a cocaine overdose, and her boyfriend is brutally stabbed by the pusher who sold her the coke. After gunning down the pusher, Kersey is approached by a newspaper tycoon who knows of the guy's death and wants to hire him to wipe out the drug trade by taking down two drug gangs. Kersey does what he does best and blasts both gangs to hell, but is betrayed by the tycoon, who it turns out is actually an ambitious drug dealer under a false identity who is seeking a monopoly over the local drug business and has tricked him into doing the dirty work for him. After Kersey's girlfriend is kidnapped by the Big Bad's men, the stage is set for a final showdown.