Film / When a Stranger Calls 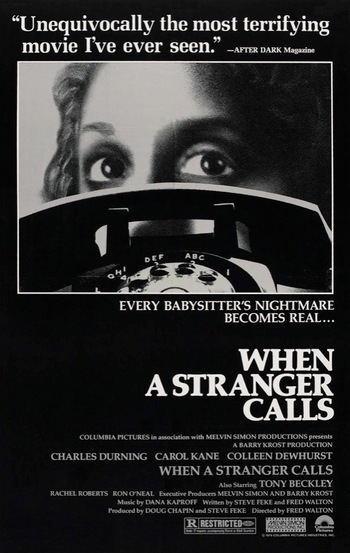 Poster for the 1979 film.
"Have you checked the children?"
Advertisement:

When a Stranger Calls is a horror movie that uses The Calls Are Coming from Inside the House as a plot. It plays with the Urban Legend of "The Babysitter and the Man Upstairs".

There are two versions: the 1979 original, directed by Fred Walton and starring Carol Kane, Tony Beckley, and Charles Durning (which was followed by a 1993 made-for-television sequel, When a Stranger Calls Back), and a 2006 remake, directed by Simon West and starring Camilla Belle and Lance Henriksen. The 2006 remake uses handheld phones (both home and cell phones) instead of the technical impossibility of a rotary-dial phone calling itself, and is no less effective for it. Also worth mentioning is that the remake is more of an extended re-imagining of the original's opening sequence, rather than a straight remake.

Both movies follow Jill Johnson, who is working as a babysitter for the children of a wealthy doctor and his wife. Not long into her job, however, she is plagued by persistent, creepy phone calls from someone who is watching her every move...

Tropes present in both films:

Tropes present in the 2006 remake:

"Have you checked the children?"