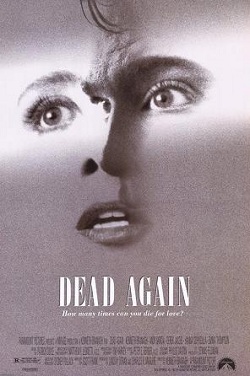 It's not actually a horror film.
Carlisle: There's a lot more people on this planet who believe in past lives than don't.
Advertisement:

Detective Mike Church (Branagh) is guilted by the priest who raised him into taking the case of a woman he ends up calling Grace (Thompson). She's amnesiac and suffers from trauma-induced muteness, broken by nightmares in which she can only cry out "somebody help me!" and the word "Disher!". The fact that she turned up at a particular convent indicates she has some connection to the house — which used to belong to a famous composer named Roman Strauss.

With a little help from a disgraced psychiatrist (Robin Williams), Mike and Grace seek out the assistance of a hypnotist, in order to see if hypnosis will bring back her ability to speak in the daytime. When her voice returns in the course of the therapy, the hypnotist decides to try past life regression on both Grace and Mike. Grace's past life reveals a romance between Roman and a woman named Margaret — and their lives in California as chronicled by a tabloid journalist. As the pieces begin to fall into place, Grace fears that Mike is the reincarnation of the man who killed her in a previous life. The truth is a little stranger than that.