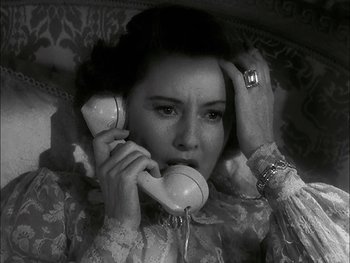 "My husband did what?!"
Advertisement:

Leona Stevenson (Stanwyck) is a bedridden, hypochondriac heiress. While on the phone trying to find out where her husband Henry (Lancaster) is on a hot New York night, she accidentally overhears a conversation about a planned murder.

Panicking, Leona starts calling friends and family to trace Henry's steps, only to discover mounting evidence that he himself may be involved with the murder.