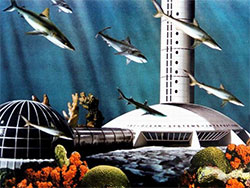 Think of it as your regular secret base. Except instead of birds, you have sharks.
"If you're looking for me,
You'd better check under the sea,
'Cause that is where you'll find me
Underneath the Sealab
Underneath the water
Sealab...
At the bottom of the sea."
— Sealab 2021
Advertisement:

Characters have their base of operations underwater. Somewhat more common with villains. Good for keeping out unwanted visitors. After all, it takes more effort to break in if you have to be looking out for giant squids at the same time.