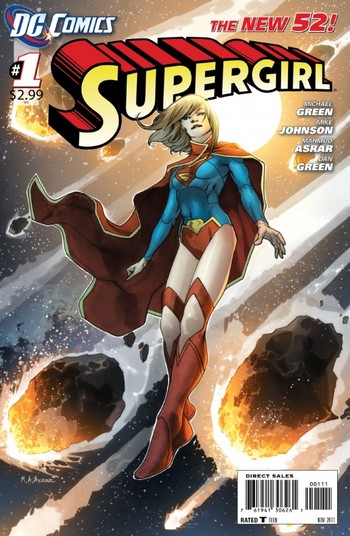 "Ever since I woke up here on Earth, I can't catch a break. Why should I expect this to be any different?"
Have you ever had that feeling... like you've been asleep for a really long time? For what seems like a lifetime. And you have crazy dreams. Things you didn't even know your brain could imagine. But when you finally wake up... The dream isn't over?
— Supergirl
Advertisement:

Supergirl (2011) or Supergirl Vol 6 is Supergirl's sixth solo book and part of the New 52 initiative, which tells the adventures of Kara Zor-El after the New 52 reboot and before DC Rebirth, spanning forty issues plus several annuals and ties-ins. It was followed by Supergirl (Rebirth) and Supergirl Vol 7.

Kara Zor-El arrives on Earth after spending several decades in suspended animation. Upon waking up she finds out that Krypton is gone, her family is dead, her baby cousin is now a grown man and she is stranded on an alien world. As she adapts to her new home world and learns to trust her cousin again, Supergirl befriends Silver Banshee; fights villains such like Simon Tycho, the Worldkillers, H'el, Cyborg Superman and Lobo; takes part in the H'el on Earth, Krypton Returns and Superman: Doomed crossovers; joins briefly the Red Lanterns; and attends to the Crucible Academy before being entrusted the protection of Earth by Superman in The Final Days of Superman.

Supergirl: For better or worse, this planet is my home now. I want to live among its people. Real people living real lives. The lives we've fought so hard to protect. Or did you forget that?