The Dog Bites Back 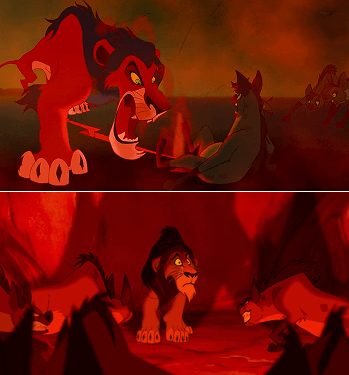 In which the hunter becomes the hunted.
"I will treat any beast which I control through magic or technology with respect and kindness. Thus if the control is ever broken, it will not immediately come after me for revenge."
—Evil Overlord List, Rule #48
Advertisement:

When the villain is dispatched by an abused member of "their" side once an opportunity for revenge presents itself.

It's all gone to hell. The base is collapsing about your ears, your Evil Plan is unraveling, the heroes are lining up for the Humiliation Conga — what more could go wrong?

Enter Bob. He's the mook you humiliated in front of his friends, or the hostage you kept chained in the basement, or the subordinate whose invention made you rich but not him. Maybe you can't even remember just what you did to Bob, but he does, and he's been waiting for a moment just like this one...

Unlike the Bastard Understudy and The Starscream, Bob attacks as a crime of opportunity. There is no danger that he will take over the villain's place in the grand scheme of things, though he might give the heroes one last fight. Bob almost never comes over to the side of good, even if he dies in the process of killing the villain, because his motive is not noble. If Bob were an innocent victim, he's only out for revenge; if Bob were evil, it proves that he was fine with all of the Big Bad's crimes except the one committed against him.

In short, when a villain has underlings who aren't willing or loyal, there's no reason for them not to pile on when his doom is certain.

Bob can also betray the Big Bad passively by deliberately NOT helping when his wounded and powerless master calls for aid. This can sometimes feature an Ironic Echo if Bob uses the Big Bad's own Villainous Demotivator lines as the reason he can't step in.

Especially likely for the villain who doesn't give a damn about anyone but themselves.

The Mole and/or Fake Defector may launch similar attacks, for similar motives, but in their case, the attack was planned, or else the plan was to look for such openings. Losing control of a Tyke-Bomb or a Psycho for Hire may result in this as well. Can result from a backfired attempt at Being Tortured Makes You Evil.

One use of this trope is to spare the hero from the burden of personally dispatching the villain, similar to a Disney Villain Death or Bad Guys Do the Dirty Work. The hero may have tipped the balance, but ultimately the villain was brought down by the toxic work environment that he himself created.

Often occurs in the form of Bodyguard Betrayal. For situations where the abused character defects to the hero's side, see Mistreatment-Induced Betrayal. Subtrope of Hoist by His Own Petard and Karmic Death. See also Nice to the Waiter. If the dog biting back does some puppy-kicking of its own, it's He Who Fights Monsters. If it's a pack biting back it's La Résistance, and The Revolution Will Not Be Civilized if they fall into evil themselves. If the hero deliberately leaves the villain at the mercy of his former henchmen, it's Do with Him as You Will. If the villain's original motivation is that the ones he served mistreated him, it's Then Let Me Be Evil or even Woobie, Destroyer of Worlds.

As a Death Trope, more than one Spoiler will be unmarked ahead. Beware.

After serving the Core for thousands of years and suffering their abuse, the Core begs him to save them. Instead, Andrias, inspired by the three girls, finally backstabs his master.

After serving the Core for thousands of years and suffering their abuse, the Core begs him to save them. Instead, Andrias, inspired by the three girls, finally backstabs his master.