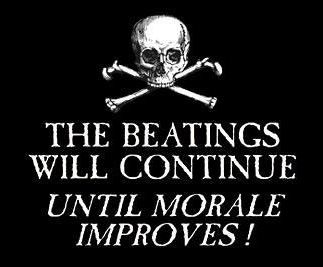 Intendant: Execute them! I think you'll find that random and unprovoked executions will keep your entire workforce alert and motivated.
Garak: I bow to your brilliance. Though I do hope your mood improves before we run out of workers.
— Star Trek: Deep Space Nine, "Through the Looking Glass"
Advertisement:

Bad guys have a lot of problems keeping a Nebulous Evil Organisation running. There's high turnover due to heroic raids, lack of professionalism in the Evil Minions, and motivating the surviving personnel. This last one is especially difficult because just as Evil Cannot Comprehend Good, it also can't understand positive reinforcement.

When a minion or even their Number Two (The Dragon) performs well, they won't so much praise their effort or reward their good results as warn them "do not outlive your usefulness". Kind of hard to go to work with a smile with that hanging over your head.

Another demotivator is the Big Bad's reaction when their minion(s) lose to the hero. Assuming they don't shoot the fellow then and there (which is, again, not exactly good for morale no matter what Machiavelli said) they will likely yell "You Have Failed Me!" and use their Agony Beam on the poor sap. After the poor minion is done screaming his guts out (hopefully not literally) their boss will say "Do not fail me again! For I shall not show you such mercy a second time." Whether they actually follow through depends on how dark the show is. In kid's media, even the Terrible Trio or the Quirky Miniboss Squad will get off with minimal verbal abuse, but others... not so much.

The Villainous Demotivator can be any threat that a Big Bad or The Dragon makes towards a lower ranking minion that they will be hurt or killed if they fail to perform their job. Assuming their skills will always be needed in his plots (and thus he would need to take the trouble of finding a replacement if he kills the Evil Minion), this makes sense as a negative motivational tool, and a nice little Kick the Dog that can fuel a Mistreatment-Induced Betrayal, a Mook–Face Turn, or (horrors!) a High-Heel–Face Turn. Other instances of this trope can happen without the villain ever meaning to demotivate their minions. He might do something so vile it reminds them of their ethics, or admit his plan will kill one of their loved ones.

May come back to haunt him as an explanation why a minion won't Give Me a Sword. Often results in Screw This, I'm Outta Here! or The Dog Bites Back.

Example of:
Working Out Their Emotions