Literature / The Book of Lord Shang 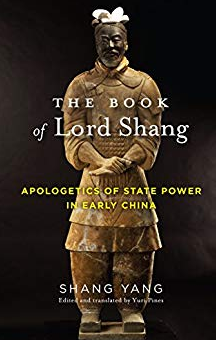 The Book of Lord Shang (商君书, Shāng Jūn Shū) is one of the most important and well-known texts of Legalist Chinese philosophy. It was written over a period of about 100 years during the Warring States Period, lasting roughly 400 BC to 200 BC. Though it is traditionally attributed to Shang Yang, and he does indeed appear to have written part of it, the last few chapters refer to people and events which didn't occur until after his death.
Advertisement:

The book expounds on how one should run a state. The main points are to keep the people occupied with agriculture, war, and nothing else. Trade should be heavily taxed to avoid people gaining money and merit by means other than farming and fighting. The law should provide far more punishments than rewards, and the punishments for minor offenses should be severe so as to discourage anyone from Jumping Off the Slippery Slope into more serious crimes. However, there are some palatable arguments; the authors maintain that promotion and advancement should be based entirely on merit, and have nothing to do with one's family or other circumstances. They also advocate that all people, from the Emperor to the lowest peasant, should be treated equally by the law. Unfortunately Lord Shang later bit the end of this when he was painfully executed, along with nine generations of his family, by the new king for having previously advocated treating him as a common criminal. Shang attempted to flee this fate but was apprehended when he was unable to stay at any inns without identifying himself, also a law that he had implemented.

In contrast to more prevalent 'Confucian' thought from thinkers such as Mencius, the Legalists believed that humans are naturally lazy, corrupt, petty, and wicked, hence the emphasis on punishment to be found throughout the book.

Also note that Legalism as actually practiced by Qin could differ considerably than Legalism as espoused by the book. When looking at Qin history, it's important to remember that every traditional work of history covering it has been written by someone with a good reason to villainize it (e.g. enemy state, successor state, member of the gentry...) and archaeological evidence from the last century paints a much more complex picture. Qin legal codes from later in the Warring States decreed a wide range of punishments, ranging from fines to state slavery to painful death, and contain some ideas much more sympathetic to modern eyes, such as forbidding wife-beating, placing strict regulations on interrogation techniques, and forcing people to help the victim of a crime in progress or be punished themselves, that were dropped for two thousand years once Qin fell. We also have bamboo slip letters written to and by common soldiers, suggesting that learning wasn't as suppressed in Qin as it's often claimed.

Compare and contrast The Prince and Zi Zhi Tongjian.

The Book of Lord Shang provides examples of: