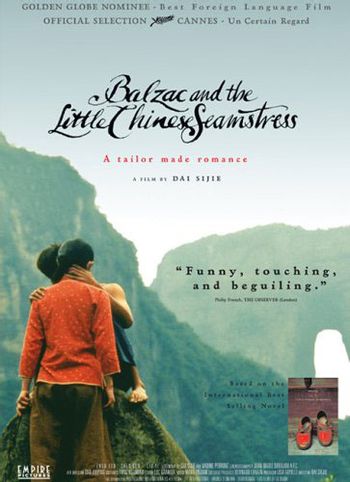 Balzac and the Little Chinese Seamstress is a novel written in 2000 by Dai Sijie, which he adapted himself to movie format in 2002.

In 1971, Luo and Ma, two college students, are sent for ideological reeducation to Phoenix Mountain, a remote part of rural Sichuan. There they are required to perform manual labor until such time as the authorities decide. One day they meet the Little Seamstress, the granddaughter of the local tailor, and decide to awaken her to the beauty of literature. They give her books by various "forbidden" authors, among whom is Honoré de Balzac.

At first their relationship is strictly platonic, but Luo and the Little Seamstress become intimate, to the silent resentment of Ma who was also developing romantic feelings for the young woman. When she turns out to be pregnant, it is Ma who arranges for her to have a discreet abortion.

The village folks learn to appreciate the two students' storytelling skills. They charge them with going to neighboring towns when a movie is playing, and then retell it to them. With the help of the Little Seamstress, they turn the retellings into quasi-performance art.

Eventually, they are successful in making the Little Seamstress curious about high culture. What they didn't expect is that she acts out on that curiosity by leaving the village and moving off to the city.

In the film adaptation, we see how Luo and Ma turned out. They were finally allowed to resume their studies, graduate from university, and have successful professional lives. Ma became an internationally famous violin player. Decades later, he returned to the village where he and Luo had met the Little Seamstress, just as it was about to be flooded by the reservoir of a dam.