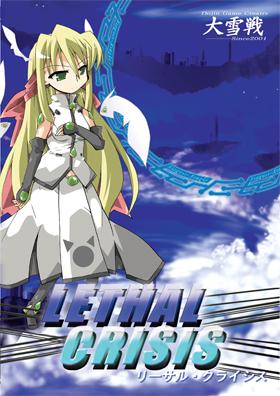 Lethal Crisis is a doujin side-scrolling action series by Daisessen for Windows. The first game, released in 2009 during Comiket 77, is a prequel to the circle's formally retail-turned-freeware game, Lethal Application. However, unlike its predecessor, Lethal Crisis is a side-scrolling action-platformer although it does share some of its gameplay traits.
Advertisement:

In this game you play as Clarino, a Robot Girl capable of arming herself with various weapons called "Applications" at her disposal. Each weapon in the games ranges from beam sabers, homing daggers, a spread gun, flare guns and more. She can also gain new abilities and power-ups as she speeds through several maze-like levels. However, to gain these power-ups and upgrades, you must complete a stage while meeting certain conditions (e.g. clearing a stage under a certain time-frame, scoring lots of points, no damage running a stage). Throughout each stage are littered with all sorts of obstacles and other robotic enemies out to destroy you. Though when push comes to being bombarded by a swarm of enemies, Clarino can throw herself into Burst Mode and let loose some very powerful attacks courtesy of a Doppelgänger Attack at the expense of draining her Life Energy.

A sequel, Lethal Crisis ProtoSphere, was released in 2011. It takes after the events of the first game but its gameplay borrows elements from roguelikes with randomly-generated levels while maintaining the action-platformer gameplay of it predecessor. Trial versions of these games can be found at Daisessen's website here

This series features trope example of: