Literature / The Ballad of Mulan 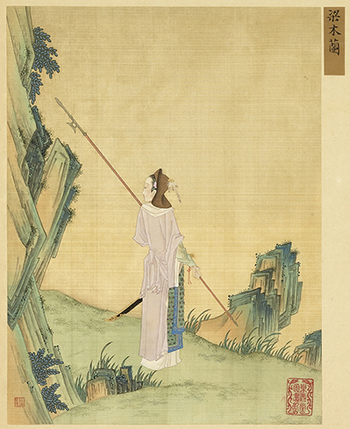 The Ballad of Mulan (木蘭辭, Mùlán cí) is a Chinese poem written in (probably) the fifth or sixth century AD. It is the origin of the Mulan character, later known as Hua Mulan.note Her family name is portrayed as "Mulan" in the original poem, as women of the time were only referred to by their surname.
Advertisement:

The story opens with Mulan at her loom. She is sad that her father has been drafted and has no grown son to serve in his place. She leaves home to take his place in the army herself. After fighting for ten years, Mulan is honored by the Khannote No, not the Emperor. In any case, during the era which the ballad could have originated, there was no one Emperor of all China; between the fall of the Han Dynasty and the unification of China by Sui in 589, China was either splintered among various regimes (apart from the last decade of Sima Yan's rule after unifying the Three Kingdoms), or fighting civil wars. and offered a high position, but she turns it down. She then returns home and resumes living the life of an ordinary woman. Seeing this, her old wartime comrades are shocked to discover that she was female all along. The poem ends by asking how you would be able to distinguish between two running rabbits which was male and which was female. note This is likely a reference to Mulan's role in the army as a cavalry(wo)man. In addition, the Chinese idiom "pu shuo mi li" (扑朔迷离; used to refer to something utterly puzzling) originates from here.

Notable adaptations of the story include:

The Ballad of Mulan contains examples of: