Literature / The Battle of Magh Tuireadh 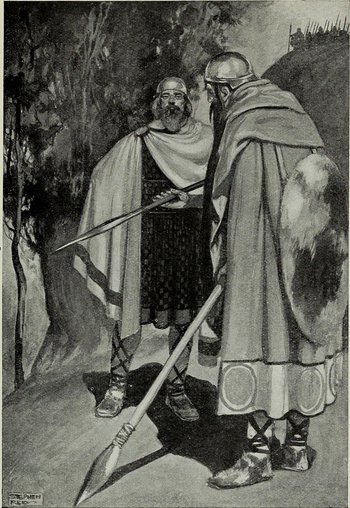 Bres and Sreng Meet
"And at last the day of the great battle came, and the Fomor came out of their camp and stood in strong ranks. And there was not a leader or a fighting man of them was without good armour to his skin, and a helmet on his head, a broad spear in his right hand, a heavy sword in his belt, a strong shield on his shoulder. And to attack the army of the Fomor that day was to strike the head against a rock, or to go up fighting against a fire."
— Lady Gregory's Complete Irish Mythology
Advertisement:

The Battle of Magh Tuireadh is, confusingly, the title of not one, but two medieval Irish prose narratives which relate the history of the Tuatha Dé Danann, the immortal and magically gifted people that, according to Irish Mythology, ruled Ireland before the coming of the Gaels.

The First Battle of Magh Tuireadh: The Tuatha Dé Danann arrive in Ireland from an unknown place of origin, intending to settle there. The present inhabitants of the country, the Fir Bolg, refuse to give up one half of the island and opt to fight for the whole instead. In a four-day battle at Magh Tuireadhpronunc. Approximate pronunciation Moytirra or Moytura., the Plain of Pillars (a.k.a. the Magh Tuireadh at Cong or the Southern Magh Tuireadh), the Fir Bolg are devastated, but in honor of their valour the Tuatha Dé let them have a quarter of Ireland, Connacht.

However, the king of the Tuatha Dé, Nuada, has lost an arm in the battle, and according to the laws of the Tuatha De has to abdicate the throne, and Bres, a noble renowned for his beauty, is made king instead.

The Second Battle of Magh Tuireadh: Meet the Fomor, a fierce people of sea-faring giants. The Fir Bolg paid tribute to them, but now that the Fir Bolg are defeated, the Tuatha Dé face the same demand. King Bres seeks the friendship of the Fomoire, and to raise their tribute, imposes high taxes on the Tuatha Dé, forcing them to do lowly work. Thus it is no wonder that when, after seven years, the physician Miach succeeds in restoring Nuada's arm, the Tuatha Dé at once depose Bres and make Nuada king again.

Craving revenge, Bres, who, as it turns out, is actually the son of the Fomorian Elatha, sails to the land of the Fomoire, Lochlann, and spurs them on to invade Ireland. This means preaching to the converted with his father, who, while he admonishes his son, sends him on to Balor of the Evil Eye.

Back in Ireland, a newcomer, Lugh, fosterling of Manannan, arrives at Nuada's court. The guards almost send the youngster away, but eventually his talents convince Nuada that Lugh is just the right man that can beat the Fomor, and makes him commander of the Tuatha Dé armies.

Having spent years preparing for war, the two peoples clash at the Second Battle of Magh Tuireadh (a.k.a. The Northern Magh Tuireadh), in an ultimate showdown that will prove costly for both sides.