Literature / The Cattle Raid of Cooley 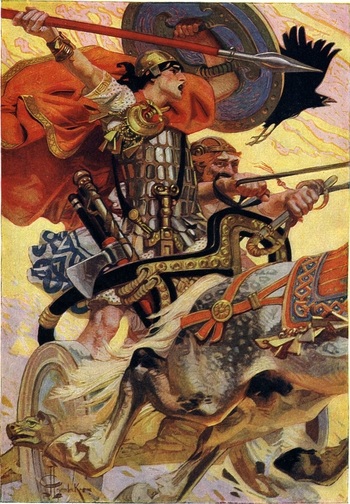 The Cattle Raid of Cooley (Táin Bó Cúailnge) is an ancient Irish story from the Ulster Cycle of Celtic Mythology. The oldest surviving manuscripts are in Middle Irish and date to the 12th century, but there are allusions to it in Old Irish poems of the 7th century, and elements of it are strikingly similar to things the Greeks and Romans used to say of the Celts.

Queen Medb of Connacht and her new husband Ailill are talking in bed one night, trying to figure out whose wealth is greater. They eventually conclude that their wealth is exactly equal except for one thing: Ailill owns a great prize bull, while Medb does not. So Medb commands the soldiers of Ireland to invade the kingdom of Ulster and steal its prized bull, Donn Cúailgne, the Brown Bull of Cooley, at any cost. This should be easy, since Ulster is under an unrelated curse that keeps the grown Ulstermen from fighting, and thus Ulster stands nearly defenseless before her army. Medb is thus opposed only by sixteen-year-old hero Cú Chulainn. Of course, Cú Chulainn is a hero in the classical sense, a demigod of amazing prowess, and the ensuing fight is epic, including several gods and a good deal of magic.

The Táin has been adapted into comics on a couple of occasions. (There's one here

, and another in Modern Irish here

). Irish Celtic-rock band Horslips made a concept album based on the story in 1973. The Decemberists' EP The Tain is a setting of Colin Meloy's interpretation/abridgment of the epic to Epic Rocking.