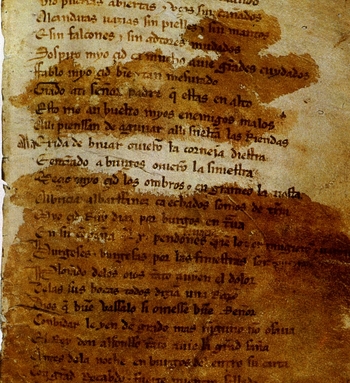 When Spanish wasn't Spanish yet
Advertisement:

Cantar del mío Cid note Chant of mine Cid or simply El Cid is the first extensive poetic work of Spanish Literature and the only epic song of it preserved almost complete. It tells the late life of Castilian knight Don Rodrigo Díaz de Vivar. The preserved version was composed, according to most current critics, around, 1200.

The theme of the Cantar de Mío Cid is the process of recovering the honor lost by the hero, the restoration of which will bring about a greater honor than the initial situation. Implicitly, it contains a harsh criticism of the high blood or courtesan Leon nobility and a praise to the low nobility that has achieved its status on its own merits, not inherited.

The poem begins with the banishment of Cid, the first reason for dishonor, because of the legal status of royal anger, unjust because it has been provoked for intriguing liars and the consequent confiscation of their inheritances in Vivar, the kidnapping of their material assets.

The figure of the Cid is represented in the poem in an idealized way, underlining his great heroism in battle and his fidelity to the king despite having unjustly banished him. In addition to being a great warrior, a profile of a tender person, a great believer and very faithful is drawn to us. Broadly speaking, it represents a model of a medieval Christian hero, who fights for his king against the enemies of his country and religion.