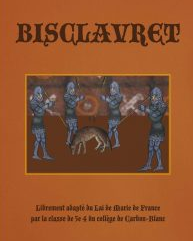 For unknown reasons, Bisclavret must transform into a wolf every week. His wife steals his clothing, without which he can't change back. One day, the king his friend goes hunting in the woods. Bisclavret jumps at him and paws his foot like a petitioner, and the king, impressed, grants the wolf his life. Bisclavret goes with the hunting party and stays at court. Everyone is so impressed by his nobility and gentleness that when his wife and her new husband appear at court, and he attacks them, the king concludes that they must have wronged the wolf and imprisons them until they confess. With his clothing back, Bisclavret can return to human form.