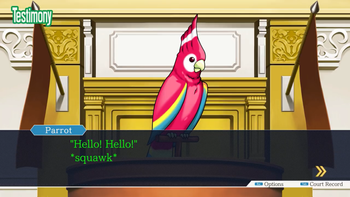 "Witness! You can't just say "hello" and expect us to get anywhere! I want you to testify!"
Lt. Randall Disher: Now he's afraid that she'll identify him.
Adrian Monk: How?
Lt. Randall Disher: She could bark at him.
— Monk, "Mr. Monk and the Dog"
Advertisement:

A specific Courtroom Antic. An animal is called to the stand to testify. It seems that in fictional courts, there is no rule against that.

Even though most all animals cannot speak any human language, the lawyer will still find a way to prove a crucial point from the animal's behaviour.

As the page image and the name imply, the two most common animals by far to get hit with this trope are dogs and parrots, although there are plenty of other animals that have been seen in the witness stand in fictionland as well.

Not related to Tropey the Wonder Dog in any way. Compare Polly Wants a Microphone. Certain instances of Not in Front of the Parrot might lead to this. See also This Bear Was Framed.